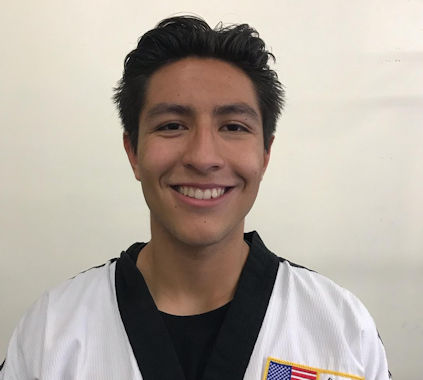 He started Taekwondo (TKD) at the age of 12 under the supervision of Master Nick. His parents thought that TKD would help him instill lifelong disciplinary skills while assisting him to break out of his shell (shyness). Ironically, during his second day of class he injured his foot and was unable to practice for about a month.

However, he was determined to continue and eventually started his teaching journey as a Jr. instructor when he was blue belt.

Instructor Manny loves the opportunity to teach and train with KTI members. He believes that there is always something one can improve upon and he encourages all new and seasoned KTI members to try their best and to have a good spirit & energy during practice sessions.

Instructor Manny is currently studying business at Chaffey Community College and he has a goal to one day start his own TKD school.